Sharing The Streets: A Pedestrian And Motorist’s View

Continuing our series of  posts for Brake’s Road Safety Week, guest blogger Duncan Bridge comments on the challenges of walking, running and driving in a busy city.

I have been living back in London for almost a year now, after an absence of just over a decade. To say that the streets have changed dramatically in that time would be an exaggeration – the place has been overcrowded and the roads clogged with drivers and pedestrians for longer than I can remember – but there are some subtle differences that make getting around just that little bit more challenging. 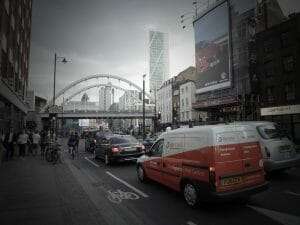 Maybe it’s my older eyes but the streetscape today seems so much more complex than it was in the past.  Cycle lanes, bus lanes, various types of pedestrian crossing, traffic calming, priority directions, 20mph zones, shared spaces, adults on scooters and a myriad of hurtling mopeds add up to a bewildering arena of near-misses. And I’m sure it’s the same in towns and cities across the UK.

I should state at this point that I avoid driving in the city at every opportunity, but there are inevitably times when you do ‘need’ the car; bigger shopping trips, collecting visitors with luggage, recycling runs – they’re all tricky to accommodate without your own wheels.

And here comes the rub, as a committed pedestrian (and occasional street runner), I find drivers and riders to be almost oblivious to the plight of slower-paced and softer-skinned road users. But, when I’m in my car, I seem to attract no end of near-suicidal behaviours from road users on foot!

It’s a sentiment that I’m sure many of us share – it’s always everyone else acting irrationally, while we remain a paragon of common sense whether we’re walking, running, riding or driving. I jest, but do think that this common duplicity raises some interesting psychological questions.

Nevertheless, being on both sides of the divide does give you some licence to offer a balanced opinion and, perhaps, even a little constructive advice without descending into nannying. So, here are my personal thoughts on how both pedestrians and vehicle users can make busy town and city streets more courteous and safer places.

Be courteous to each other

Pedestrians – our pavements tend to be narrow so don’t stop or dawdle in a large group, forcing other pedestrians off the pavement and into the road. If someone is going to have to step off the pavement to pass, let it be the person facing oncoming traffic so that they can see whether it’s safe to do so. Runners – if the pavements are busy, I’m afraid it falls to you to take to the road or slow to a walk. It’s not for others to get out of your way.

Whenever you’re crossing a road and there’s traffic around, try to make eye contact with the driver or rider. Firstly, it’s a great way of ensuring that they have actually seen you and, secondly, they’re much more likely to give way to let you cross. Having made eye contact, a friendly raising of the hand or nod to acknowledge is all it takes to show your gratitude.

I’ve seen the argument made that you shouldn’t need to thank drivers for letting you cross the road, particularly where you have right of way on a crossing, but surely this simple act of courtesy doesn’t cost anything?

Be a considerate zebra user

There’s a zebra crossing right outside a tube stop just down the road from where I live and it’s a nightmare for motorists. At busy times of day there’s a constant stream of pedestrians, either entering or leaving the station, and traffic can be stuck there almost indefinitely. If you can see that vehicles have been waiting for a long period, think about hanging back just for a second to let a couple of them pass. It will keep everyone moving and tempers from fraying.

It’s also worth remembering that the Highway Code states that drivers don’t have to stop until someone has moved onto the crossing itself. Make sure you are at the edge of the crossing and have been clearly seen by any drivers before expecting them to stop.

Runners (and cyclists) – don’t expect drivers and riders to know that you’re going to shoot across a zebra crossing at speed, stop (and dismount if you’re on your bike) and then cross. And the slower-moving amongst us, please don’t dawdle when you’re near a crossing, giving drivers no idea whether you intend to cross or not.

In a 2017 poll of road-users, the RAC found that failing to indicate clearly was deemed the most inconsiderate of driving (mis)behaviours. And I would agree! If you’re another driver or rider, or you’re a pedestrian trying to negotiate a busy junction, the last thing you need is a driver who isn’t clearly signalling what their intentions are.

There are dozens of mini-roundabouts in my part of London and the number of times you see someone taking the first exit, without indicating, while there’s a queue of oncoming traffic and eager pedestrians just waiting for that gap, is… well… a large number!

If you’re one of the lucky few to have off-street parking outside your house, do remember that when you’re driving across the pavement to get in or out of it that you have to give way to pedestrians. You are crossing their thoroughfare, not the other way around!

The same also applies if you’re making a turn onto a street and someone is already crossing – it’s common sense to give way to them (not to mention, the law) but I’ve seen many drivers infuriated that someone would dare to be crossing a road they intend to use.

Do expect there to be someone about to step (or run, or ride, or scoot) onto a zebra crossing as you approach it and slow down accordingly. It might be that you don’t have to stop unless someone is already on the crossing but, at the end of the day, it’s always going to be the pedestrian that gets squished and you don’t really want that on your conscience (or police record).

Adults, teenagers, children, toddlers, cats, dogs, foxes, squirrels… They can all show a healthy disregard for their own safety (as well as the rules of the road), so do expect to have to stop at a moment’s notice as one (or a pack of them) emerge from between parked cars, behind a hedge, from a KFC …

Joking aside, most of my local streets are now 20mph zones and, while it does seem horrendously slow from behind the wheel, travelling any faster in areas of dense population does put lives at risk. Put up with the frustrated tailgaters and calmly tootle around the streets knowing that you’re in the right and unlikely to do anyone fatal harm.

There are a lot of EVs in west London and they make you highly conscious of how much you rely on your hearing when you cross the road. I’ve lost count of the i3s, Leafs (should that be Leaves?), Prius, Telsa S’s and X’s and, perhaps more worryingly, Cayenne E-Hybrids and Range Rover PHEVs, that I’ve almost not spotted when they’re in stealth mode. So guys, be aware that pedestrians are going to be a little bit less aware of you than of conventional cars.

In conclusion, there’s no silver bullet but a little bit of common sense combined with equal measures of patience and courtesy and busy streets can be a safer and more pleasant place for everyone.

Coming up tomorrow – a cyclists view and safety tips.