The rise and rise of the connected car

Connectivity the new buzz word for 2016

If the Consumer Electronics Show (CES) in Las Vegas in January was anything to go by, the buzz word for motor manufacturers for 2016 is ‘connectivity’.

This year’s CES showcased a whole host of new connectivity features from leading vehicle manufacturers, including Ford, Volkswagen and BMW, which look likely to set the tone for the year ahead.

As today’s cars become increasingly technology-driven, all the major motor manufacturers are looking for that edge in connectivity that will attract today’s IT-literate car buyers.

The 2016 Consumer Electronics Show had a huge focus on connectivity, entertainment and autonomous car systems as leading brands sought to show off their latest connected developments.

Ford, for example, revealed details of its latest SYNC 3 in-car touch screen technology, with plans to connect the system to smart home systems – so you can control your home from your car and your car from your home.

The third-generation SYNC system has a host of new features, including Apple CarPlay and Android Auto smartphone connectivity, plus the ability to check fuel levels and other data from a smartphone app.

SYNC 3 is already available on some models in the US, but it’s expected to debut on this year’s Edge SUV in the UK after its launch in the summer. It should then roll out across most of the range, with the Kuga, Mondeo and Focus next in line.

Most models fitted with SYNC 3 will likely be offered with both a capacitive touchscreen and buttons. But the biggest selling point will be full integration with your smartphone, allowing music streaming, full location services and improved voice recognition on the move.

Volkswagen put aside its current emissions problems to unveil some of its latest connected thinking in its new electric concept vehicle, the Budd-e. 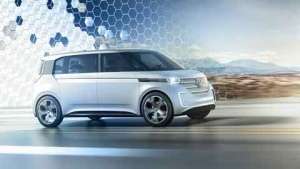 This new all-electric microbus is based on the new MEB modular electric platform for electric vehicles and has two electric motors, front and rear, to deliver four-wheel drive.

It boasts a high level of new technology, with VW describing it as a mobile home, with a new driver interface and plenty of connectivity, including the ability to link to a home’s smart devices.

Internal displays are customisable and controlled by gesture, touch or voice commands, eliminating the usual assortment of buttons, switches and gauges.

Volkswagen also unveiled the Touch system for its e-Golf hatchback, a new infotainment system using a 9.2-inch touchscreen display. It features a configurable home screen, an improved voice control system and the ability to read and reply to text messages while driving.

There was also electric voice amplification, which makes it easier to talk to those in the back seats, and a future version will feature cloud integration to transfer settings to other cars. The facelifted e-Golf featuring this latest technology will be out later this year.

Demonstrating new gesture control functionality and a sleek interior, BMW showcased a giant new, dash-wide-sized, 21” diameter screen in a concept version of its i8 Spyder.

This featured a new interior system called “BMW iVision Future Interaction,” which relies on cloud-based services and integrates Airtouch, the next step in BMW’s gesture control functionality and does away with all switchgear hardware.

The gesture control features three sets of sensors across the length of the dash so the driver and passenger have individual touch points from which to control the long high-resolution display.

BMW says that the iVision concept combines as many options of control as possible to give passenger and driver multiple choices behind the wheel. In addition to the gesture control, the menu can also be scrolled through on the touch-sensitive centre arm rest, which replaces the scroll wheel in current models.

The new move is part of the company’s plan to release a fully autonomous car by 2030 and some of the key technologies will be displayed at the Geneva Motor Show in March.

At the CES, Kia also revealed some of its latest technology in a personalised ‘I-cockpit’ display which featured fingerprint and gesture recognition. The system can also set the music and climate control automatically.

Built on a modular platform, the chassis can be lengthened with extra battery cells added between the axles, allowing a variety of body-styles to be made. 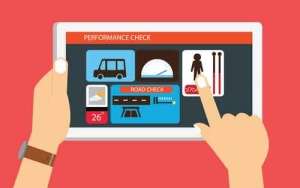 In other connected developments, the AA has announced it is to work on new connected car software that could both pre-empt and diagnose breakdowns.

Under the Intelematics Europe joint venture, the AA is teaming up with roadside assistance clubs in the Netherlands (ANWB) and Austria (OAMTC), plus Intelematics, a subsidiary of the Australian auto clubs and a specialist in connected car services and products in Australia.

The new technology is designed to deliver a range of benefits including improved deployment of appropriate assistance and a more accurate and faster service. In addition, the tracking of information on driving could allow the provision of cheaper car insurance.

If you would like more information about the latest developments in connected cars and how to select the most appropriate models for your fleet, then please get in touch.