Paper tax disc to be abolished

Tax disc changes – what they mean for you

A fundamental change to the way cars are taxed is coming soon. Chancellor George Osborne abolished the iconic paper tax disc in his Autumn Statement last year, removing the need to obtain the little round disc that we have been fixing to our windscreens for more than 90 years.

The abolition of the paper tax disc, which has been in existence since January 1921 and is intended as visual proof that motorists have paid Vehicle Excise Duty, is in favour of a new online system that will save fleet operators an estimated £10m per annum and speed up leasing and rental processes, as well as saving £3m in administration for the DVLA.

The change has been welcomed by many fleet and motoring bodies, not least the trade association of the rental and leasing industry, the BVRLA, which believes the demise of the tax disc removes an administrative inconvenience for millions of motorists and businesses.

Officially, the abolition of the tax disc comes into effect from October 1, 2014, and up until that point, motorist, drivers and fleet owners should apply for, and will be issued with, the familiar paper tax disc.

From that point onwards, however, the tax disc will cease to be issued and a new online system comes into force. Vehicle owners will still need to tax their vehicles exactly as before, under the same CO2-based rating system, but no visual proof will be issued. Registered keepers will continue to be issued with reminders by the DVLA that their tax is due and what the amount to be paid is in the usual way. But the DVLA and Police will now refer to the DVLA’s electronic vehicle register to check and confirm that a vehicle is taxed.

For drivers who want reassurance that their vehicle is currently and correctly taxed, the DVLA has introduced a new service at https://www.gov.uk/check-vehicle-tax which allows drivers to log on, with their vehicle details, and check its status. You will need to input your vehicle’s make and registration number to access all relevant vehicle details, including the tax renewal date and the amounts for a six-month and a 12-month licence.

Those motorists without internet access will still be able to tax their cars by telephone or in person at their local post office in the usual way.

Under the new system, vehicle owners will no longer need to make a separate application for a refund of vehicle tax. The DVLA will automatically issue a refund when a notification is received from the person named on the DVLA vehicle register that the:

In another new development, the DVLA is also offering the ability to pay vehicle tax by direct debit annually, six-monthly or monthly.

There will be no additional handling fees for annual payments but, to limit the impact on the public finances, there will be a small surcharge of 5% of vehicle tax for six-monthly and monthly payments. However, the direct debit system is not available on:

The tax disc has been part of the fabric of motoring for a long time and we are sure it will take some getting used to not having it on show in our windscreens. But, with the widespread use of real-time online systems by the Police and other agencies to combat avoidance, the role of the tax disc has become largely symbolic.

If you would like more details regarding the changes to the vehicle licencing system you can go to https://www.gov.uk/government/news/vehicle-tax-changes. 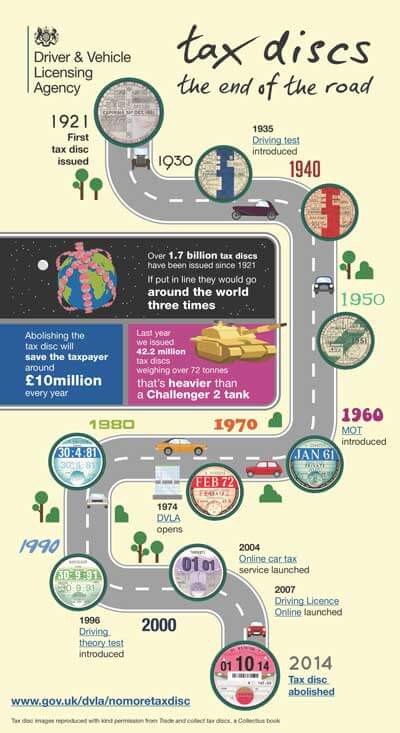