It has been reported this week that rules to mandate speed limiter technology in cars have been provisionally agreed by the EU and that it is likely that Intelligent Speed Assistance will be required for all new cars sold in Europe by 2022. Regardless of Brexit outcomes, the UK government has already indicated its support.

What is Intelligent Speed Assistance?

The Intelligent Speed Assistance system enables cars to receive information via GPS and a digital map so that the vehicle knows what the speed limit is and can limit its top speed accordingly. In addition to the data feed, an onboard video camera, capable of recognising road signs, would also be a feature.

It is expected that, as is the case with other driver aids, the system could be switched on and off. And like cruise control for example, drivers could override the limit setting by putting their feet down. 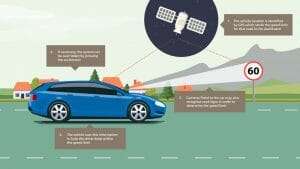 Why is speed limiter technology being introduced?

Speed is known to be a contributory factor in many accidents and it is anticipated that the new technology will help reduce the incidents and injuries. Road safety organisations are already welcoming the developments.

Research evidences that drivers routinely speed without expecting to get caught, don’t consider themselves as “criminals” for doing it, and view the law as being more like a set of guidelines. Initiatives like speed awareness signs, awareness courses for offenders and speed cameras help deter speeders; average speed cameras really do appear to make a difference. To some, the new technology is the next logical step in clamping down.

Of course, fewer instances of speeding will have other benefits such as reduced fuel consumption and exhaust emissions, and wear and tear on vehicles is lessened.

The use of telematics is increasingly common in professional fleets and fleet managers are using this to track vehicles, monitor deliveries, evaluate drivers and determine training needs, or required policy changes. The Intelligent Speed Assistance system will apply to all vehicles whether they are purchased privately or by businesses.

Most people drive sensibly and want to keep safe on the road, so may welcome extra driver aids rather than see them as an erosion of their free will, or having an auditor in their car with them.

Surely this is good news?

Whilst any measures that genuinely improve road safety are generally received positively, the Intelligent Speed Assistance system comes with a sting in its tail that may well affect driver behaviours in unexpected and counter-productive ways.

In connection with the system, going forwards, vehicles will have compulsory black box type technology that will allow them to record performance and driver input. And that raises lots of questions about who the data belongs to, or can be accessed by … the police, your insurers, your employers?

When a plane crashes, the data recorders are the first things investigators look for, it might not be long before a similar approach is taken with vehicle accidents. And if a driver’s black box has recorded a habitual speeding habit, it is likely to be looked on very dimly by the police and the insurance industry.

What could be next?

Thinking in dystopian future terms, how much longer could it be before the same black box and GPS technology could be reporting a driver to the authorities for each and every speed infraction? If the data is there …

It’s this Orwellian “Big Brother” concern that has raised the hackles of some of the drivers we have talked to in connection with the topic.

One driver in particular had an interesting viewpoint in that he stated he would opt out of his company car scheme to avoid the technology and instead buy an older car without a speed limiter. This was a driver that had a clean licence and, in a thirty-year driving history, had never been penalised for speeding.

It’s this unexpected reaction that leads to all sorts of other questions and the need for wider debate. Would this technology actually damage the new car sales market? Would it see the fleet industry struggle to keep its drivers in company car schemes? How would the government’s environmental objectives be impacted if new vehicles were avoided?

With many believing that company cars are already taxed to, or even beyond, the limit of the benefit, will ISA become another hurdle for fleet managers that are keen to keep their drivers in the cleanest, safest, business appropriate vehicles they can?