What will new, more stringent regulations mean for your fleet?

New Euro6 emissions regulations for diesel cars and vans that take effect from this September, and also cover new models launched since last September, have meant that vehicle manufacturers have had to take concerted action to clean up their act.

The new regulations target a host of emissions, especially those of nitrogen oxides (NOx) and cut the permissible limits for NOx from the current 180mg/km to just 80mg/km. The regulations also cover a wide range of other harmful emissions, including carbon monoxide (CO), non-methane hydrocarbons and total hydrocarbons and particulates (PM).

The aim is to reduce these emissions, thereby limiting the impact on the environment and public health. Many major European cities are currently looking at banning non-Euro6 diesels at certain times and on certain days. 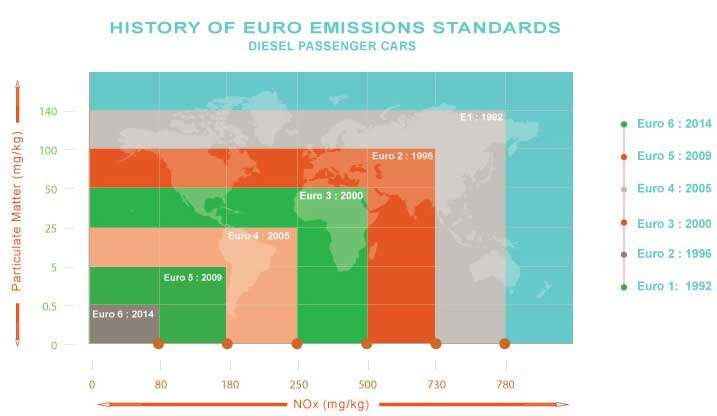 How are manufacturers meeting the regulations?

Many vehicle manufacturers are looking at a number of options that include vehicle weight reduction, reduced compression ratio and more efficient drive-trains.

But the most common remedies are after-treatment systems such as Selective Catalytic Reduction (SCR), which works with a reduction agent, typically known as AdBlue, and the Lean NOx trap, which is fitted instead of the normal oxidation catalytic converter.

The systems aren’t usually required on small cars, as optimised combustion is sufficient to meet the European NOx limits on smaller models, so it is generally found only on larger cars, SUVs, and commercial vehicles.

How does Selective Catalytic Reduction work?

For the latest new-generation, low-emission diesel models fitted with SCR, this works by the introduction of a reduction agent – synthetically produced urea or carbamide – in the exhaust system, upstream of the catalytic converter.

Most commonly known as AdBlue, it is continuously sprayed into the exhaust gas and assists in the breakdown of harmful NOx, turning nitrogen oxide into harmless steam and nitrogen.

However, AdBlue is consumed in proportion to engine usage, and levels need regular monitoring and checking.

Falling levels are indicated by a warning light on the dashboard to tell the driver when the tank is reduced to a quarter full. A further warning occurs if the tank reaches minimal levels of AdBlue.

Fleet operators who opt for a Euro6-compliant engine that uses AdBlue will need to bear in mind the additional cost of the fluid and how it will be topped up. In certain cases, this could be by the driver at a filling station, and in others by a technician in a workshop.

AdBlue tank capacities vary from model to model, although typically they are 17- 31 litres, while the fluid itself typically costs £1.30-£1.40 per litre – although some manufacturers are reported to be charging more.

A vehicle may need AdBlue fluid levels topping up by 50-100% at a service, although usage is linked to vehicle load, environmental conditions and driving style. The smoother the style, the longer the liquid will last.

What operational issues does AdBlue present?

When the AdBlue tank is empty, some vehicles are programmed not to restart until more is added, which can obviously present fleet operators, and their drivers, with major operational issues.

The location of the AdBlue tank varies across manufacturers and from model to model, but is often close to the diesel tank or in the boot, under the carpet, or in the engine compartment. It can usually by identified by a blue cover.

Manufacturers will typically top up the tank at time of service, but consumption of AdBlue can vary enormously according to vehicle type and model, vehicle load, environmental conditions, driving requirements and driving style.

And, with many of today’s diesel vehicles having variable servicing intervals, fleet managers need to encourage drivers to keep a watchful eye on tank levels to ensure their vehicle will start.

Vehicles using AdBlue are equipped with special dashboard warning lights, but again the message displayed varies across manufacturers. The additive itself can be bought at retail outlets, dealerships or service stations, with some manufacturers providing AdBlue free of charge, if supplied through one of their dealerships.

Costs for refilling the AdBlue tank vary but could typically be at least £20 per company car or van per service once labour charges have been applied.

With the typical company car undergoing perhaps three services during its fleet life, this could amount to, at a conservative estimate, £60 per vehicle having to be added to a fleet’s SMR budget.

In many cases it is a hidden cost for fleet managers and therefore an unbudgeted one. On a 100-vehicle fleet with each model undergoing three services, the additional SMR cost could amount to £6,000 and possibly more.

What are the alternatives?

One alternative way of meeting Euro6 emissions regulations is via a Lean NOx trap, which is maintenance-free and doesn’t require additives.

Ford is one manufacturer which has opted for the Lean NOx trap on passenger cars and light commercial vehicles up to the Transit Connect, as it believes it offers the best balance of cost, weight and fuel economy.

The Lean NOx trap is fitted instead of the more usual oxidation catalyser and, in normal running, traps the NOx pollutant from the engine in its porous core.

When the engine is run in a rich burn mode, with just enough air for complete combustion, harmful NOx is converted to harmless nitrogen. The NOx trap is then regenerated and ready to start the process again.

Volvo is another vehicle manufacturer which has opted for the Lean NOx trap on its new Drive-E engines. The manufacturer believes it offers several advantages over an SCR system as it is maintenance-free and no customer actions are needed throughout the vehicle’s lifetime.

While It remains to be seen whether manufacturers will put up prices to cover the cost of the systems required to comply with Euro6, many fleet managers are concerned that ultimately Euro6 will increase their fleet running costs.