A new year always brings new metal to drive, but there are extra criteria to think about in 2019. The wonderfully snappily-named Worldwide Harmonised Light Vehicle Test Procedure (WLTP) comes into full force this year. This is the name for the EU’s new fuel efficiency ratings for all petrol, diesel, electric and hybrid cars and will need consideration when choosing fleet cars.

With no word on company car tax changes until spring, we’re going to put the focus on lowest emission vehicles first and look at what could well be great new fleet cars this year.

The new super saloon from Peugeot has been winning awards left, right and centre, as well as bagging top marks in multi tests by motoring outlets. A current P11D value from £24,780 – the amount used to calculate the amount of company car tax you pay – makes it a promising ownership proposition.

Gone are the days of the lacklustre last gen 508 – this one’s all about looks. From the chiselled front end and large lion tooth daytime running lights to its svelte coupe-like profile. There isn’t a saloon that can come close to the new 508 in terms of style.

Emissions-wise, the 508 features a 1.5-litre BlueHDi diesel engine making 131 hp, which is coupled with the brand’s EAT8 automatic gearbox. Currently, there aren’t any official figures for the CO2 output of this model. However, if we look at the 3008 which is a bigger car, that pumps out just 107 g/km of CO2 when fitted with the same engine and gearbox. The new 508 should be around that figure, making it a good choice for fleet cars.
You can also opt for the 2.0 litre BlueHDi which will be the most popular, again it has the same 8-speed auto ‘box, but will pump out 118-122 g/km of CO2.

A favourite of buyers of fleet cars, this is the classic multi-functional car that combines effortless driveability with practicality by the bucket load. Now in its seventh generation, this new 3- series will be launched around March time. 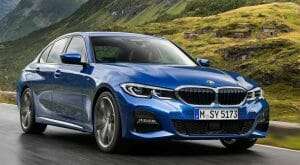 Some of its new looks have proved to be a little divisive, but the wider grille and squinted headlights make the 3 look meaner than ever. Regarding emissions, there will be a new, more efficient plug-in hybrid; this all-new 330e will be capable of 37 miles on pure volts. It will also pump out less than 40g/km of CO2, so expect this to be a big fleet cars winner.

There will naturally be the staple 2.0-litre diesel. The current EfficientDynamics automatic emits just 114 g/km so it should be around that figure, unless it gets hit by WLTP.

Honda’s all-new CR-V packs some seriously good looks for an SUV. If you’ve got to run family around at the weekends, you’ll want to give it a second look. You can also get a seven-seat option if needed, but Honda says it’s still both sporty and luxurious. 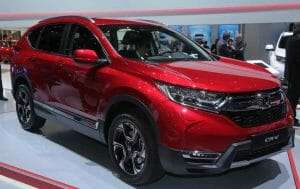 Its lowest polluting version will be the hybrid, this will feature a 2.0-litre petrol engine alongside a stand-alone electric twin-motor. Honda has also gone with a single gear ratio, rather than a conventional gearbox, so it will be like driving an EV.
There are no figures on g/km yet, but power is rated at 181 bhp and a whopping 315 Nm of torque, which should make it a good tow vehicle too.

The CR-V hybrid will go on sale late 2019 and could be a popular fleet car option.

While not a completely new model, Skoda will be unveiling a plug-in hybrid version of its fantastic halo saloon, the Superb. This PHEV is expected to enable the Superb to drive for 40 miles on battery power alone. It will also feature the brand’s punchy 1.5-litre turbocharged engine. Combine that with the electric motor and the figures will be around 242 bhp. 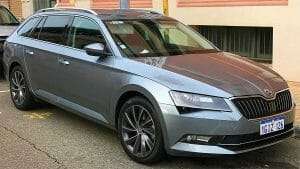 There’s also rumoured to be a swathe of upgrades to the rest of the Superb powertrains, to make them more efficient and lower emissions even further. The PHEV will be released springtime.

Last but not least of our picks is the new Volvo S60, the Swedish saloon to rival BMW, Audi and Mercedes. However, there won’t be any diesel engines which could well put off some fleet buyers. 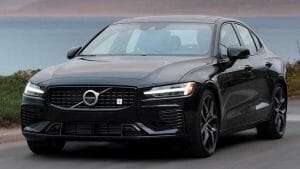 Volvo does know how to do plug-in hybrids though. The XC60 T8 Twin Engine has a combined performance figure of 385 BHP. That powertrain will be in the S60 from launch, so watch out BMW –  your 330e is going to have some seriously stylish and stiff competition.

Prices will start around the £31,000 mark when it goes on sale sometime in the summer.

That’s what we know so far, there will undoubtedly be some surprise new engines over the next year as everyone races to get the lowest CO2 rating due to WLTP. Honda are always a strong contender when it comes to efficient diesels, but don’t discount Mazda as they’ve been working away in the background to make their larger engines cleaner and more efficient.